Planning consent received for improvements to maisonette block in Liverpool

TADW have received planning permission for improvements to an existing maisonette block in Wavertree for Liverpool Mutual Homes. The works include overcladding the front and rear elevations of the building, door and window replacement, extending and enclosing the stairwell and landing areas, along with providing PV panels to new roof structure and finishes to power the communal areas. 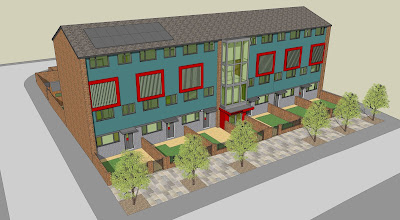 External Improvements also include the integration of car and cycle parking within the curtilage of the development, providing communal and private gardens. 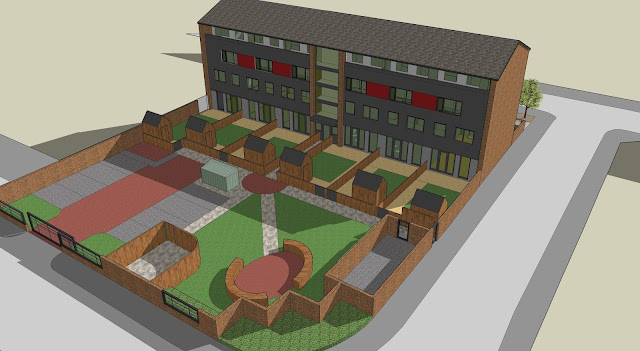 Posted by TADW Architects at 05:52 No comments: 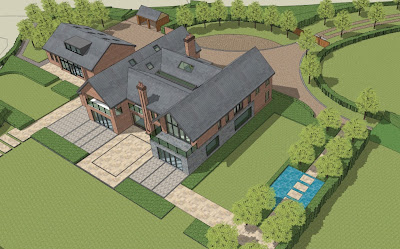 We are delighted to announce that planning permission has been granted for a 6 bedroom Country House in Prestbury that we have had the pleasure of designing for a private client.
The design provides a traditional country house façade facing the passing road, with more contemporary styling to the south facing rear, which includes large areas of glazing affording spectacular views across the countryside.

Posted by TADW Architects at 06:52 No comments:

Investors In People—We are GOLD!

I am delighted to report that we were awarded the Investors in People GOLD standard at our recent assessment.
This high level of accreditation demonstrates our commitment to staff development and in providing a quality service to our clients.
Suzanne Wilkinson, Investors In People Assessor stated in her report:
“There is something unique about the working environment at TADW and with a team of long serving employees, everybody ‘gets it!”
It is greatly encouraging when you are assessed by a third party and the results reinforce the way we choose to work.
George Noworyta, Director.

Posted by TADW Architects at 06:49 No comments: 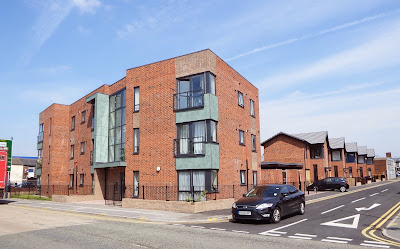 TADW are pleased to announce the completion by Seddon Construction of ten houses and eleven flats for New Charter Housing Group.  The Cotton Street East development in the centre of Ashton, was designed to respond to very difficult site conditions – specifically a plot width of less than 30m, coupled with overbearing existing elevations on the surrounding streets.

To address these issues a saw-tooth footprint was adopted, allowing the resulting house type to turn its primary windows down the street rather than across it.  It also manages to avoid having any habitable windows on the rear elevations thereby allowing the maximum potential of the site to be realised. 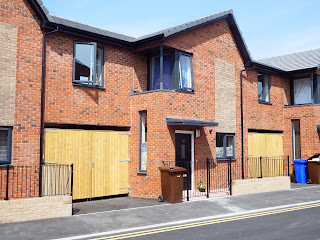 The houses are equally innovative internally as the client was keen to incorporate unusual features such as double height spaces and window seats.  Care was also taken to orientate the downstairs WC/utility room in such a way that it didn’t intrude upon the open plan kitchen and living room space. 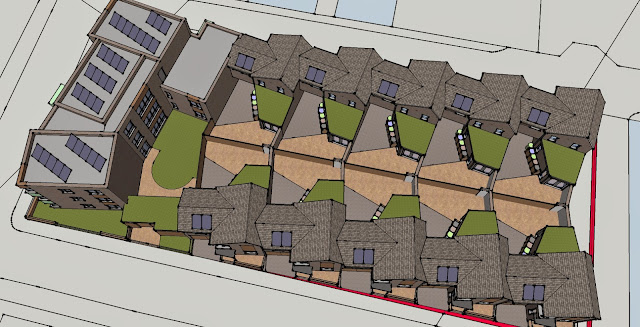 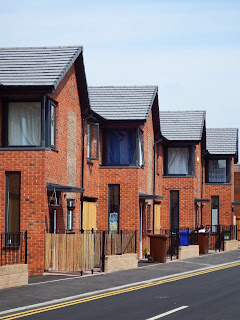 With such a narrow site it was obviously difficult to provide any substantial amenity space, so instead the houses benefit from a paved patio area, reminiscent of that which would have been found on the Victorian terraces that once occupied the site.  Alongside this we have also been able to incorporate secure parking for two cars.  However the impact of all this hard landscaping is softened by the green roofs provided to the single storey outriggers at the rear of the properties.

The house type has proved to be both successful and flexible, such that we are now using variants of the basic design with more conventional rectilinear footprints and with different window configurations across the region.
Posted by TADW Architects at 04:17 No comments: 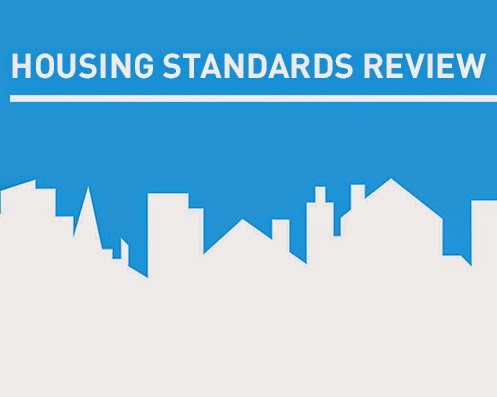 The Housing Standards Review, launched in October 2012, has led to the publication of new and revised Building Regulation Approved Documents and a Nationally Described Space Standard last Friday 27th March 2015, which will come into effect on 1st October 2015.


During the consultation period it was proposed for there to be 3 categories of housing, which would be set out in an expanded Approved Document M.  This has materialised, however the government has elected not to set minimum gross internal floor areas for these categories as previously suggested.  Categories 2 and 3 are optional requirements which may be required by conditions attached to any planning permission on a scheme by scheme basis.


The 3 categories can be summarised as follows:


As a guide, an earlier consultation document prepared by the working group provides approximate gross internal floor areas that should meet the requirements of each category: https://www.gov.uk/government/uploads/system/uploads/attachment_data/file/230251/2_-_Housing_Standards_Review_-_Technical_Standards_Document.pdf


Sat alongside the changes to the Approved Documents is the Nationally Described Space Standard which will come into force only if required through the relevant Local Authorities Local Plan.  This document does set minimum gross internal floor areas, room areas, storage areas and a minimum floor to ceiling height of 2.3m which will need to be met where it applies.

In addition to the above changes, there have been revisions to Approved Documents E (resistance to the passage of sound), G (sanitation, hot water safety and water efficiency), H (drainage and waste disposal), M (access - as above) and a new approved document Q introduced to address dwelling security.
Posted by Andrew Murch at 01:43 No comments:

Planning approval has been granted for the refurbishment of two Victorian houses, located in Buxton Conservation Area, to provide 11 self contained apartments for Peaks and Plains. 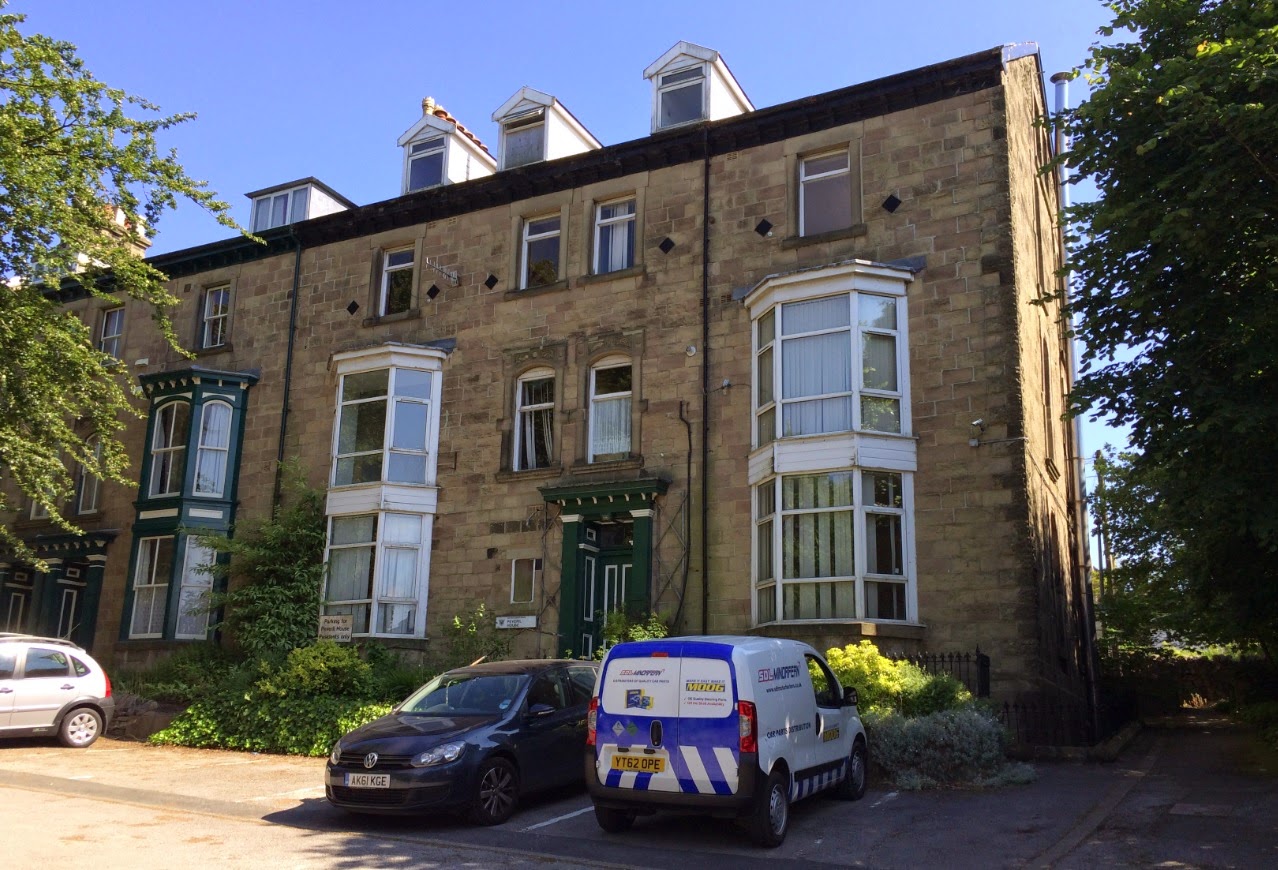 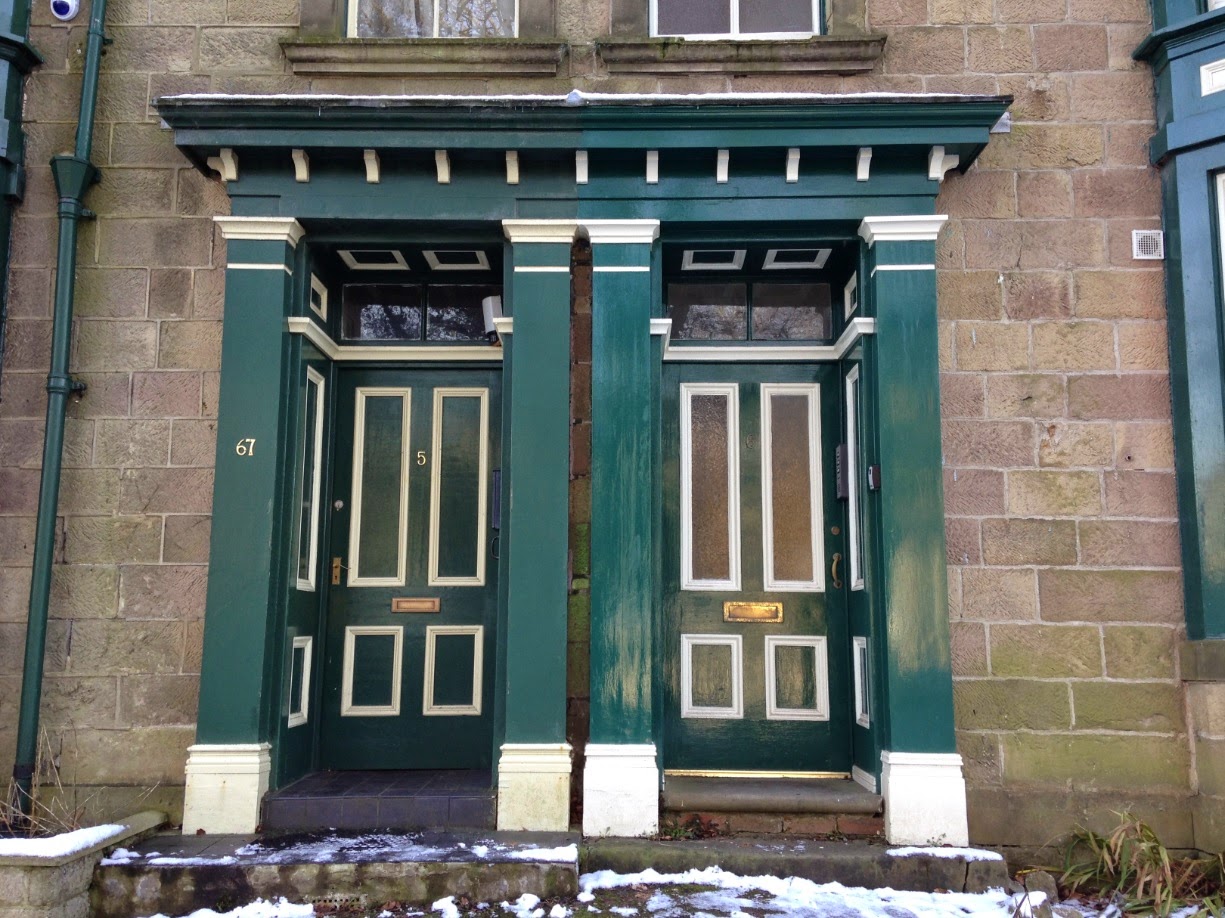 The development will receive major internal and external improvements, and original features such as timber sash windows, and a main entrance door and surround will be reinstated.

Work is expected to commence on site later this year.
Posted by TADW Architects at 04:16 No comments:

Planning approval has been granted for four new houses on a garage site at Drake Court, South Reddish for Stockport Homes.

The development will provide 4 two bed-four person houses and help meet the local demand for much needed affordable housing.  The design of the house type provides a suspended first floor over a covered car port which bridges some existing sewers to allow for future maintenance to be carried out if required.

The scheme is expected to commence on site later this year.


Posted by TADW Architects at 03:40 No comments:

There is light at the end of the tunnel for the congregation of Emmanuel Church in Langworthy, Salford now that Fairbuild Construction have started work on site to complete the long awaited construction project. 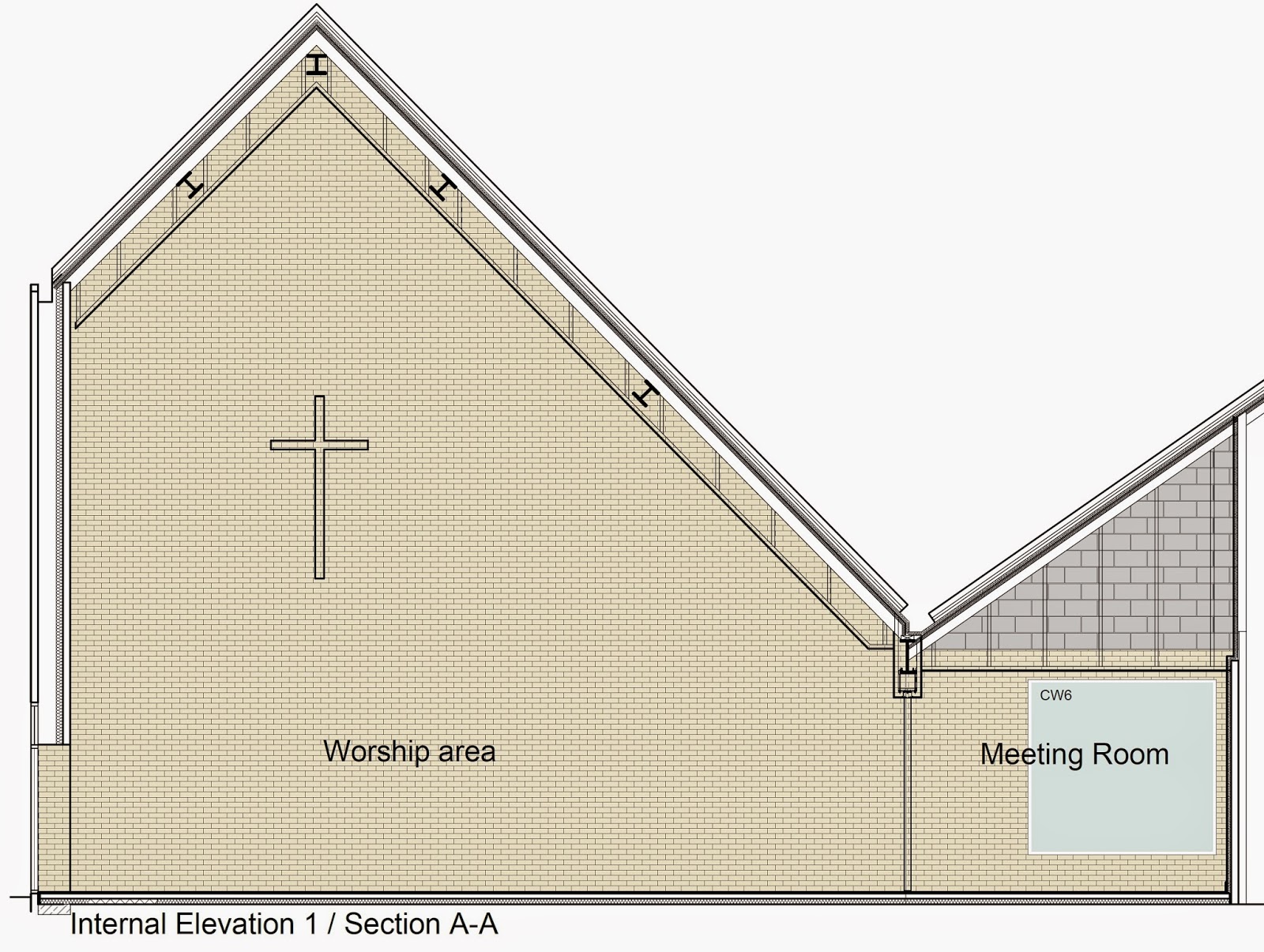 Part of the larger Emmanuel Church and Centre development, which also includes community, sporting facilities and apartments, the dedicated Church worship area has been incomplete for a number of years, and we are delighted to be working together with the Church and its members to enable them to complete and finally enjoy their new worship area.

The project is scheduled to complete in June this year.
Posted by Andrew Murch at 06:52 No comments: 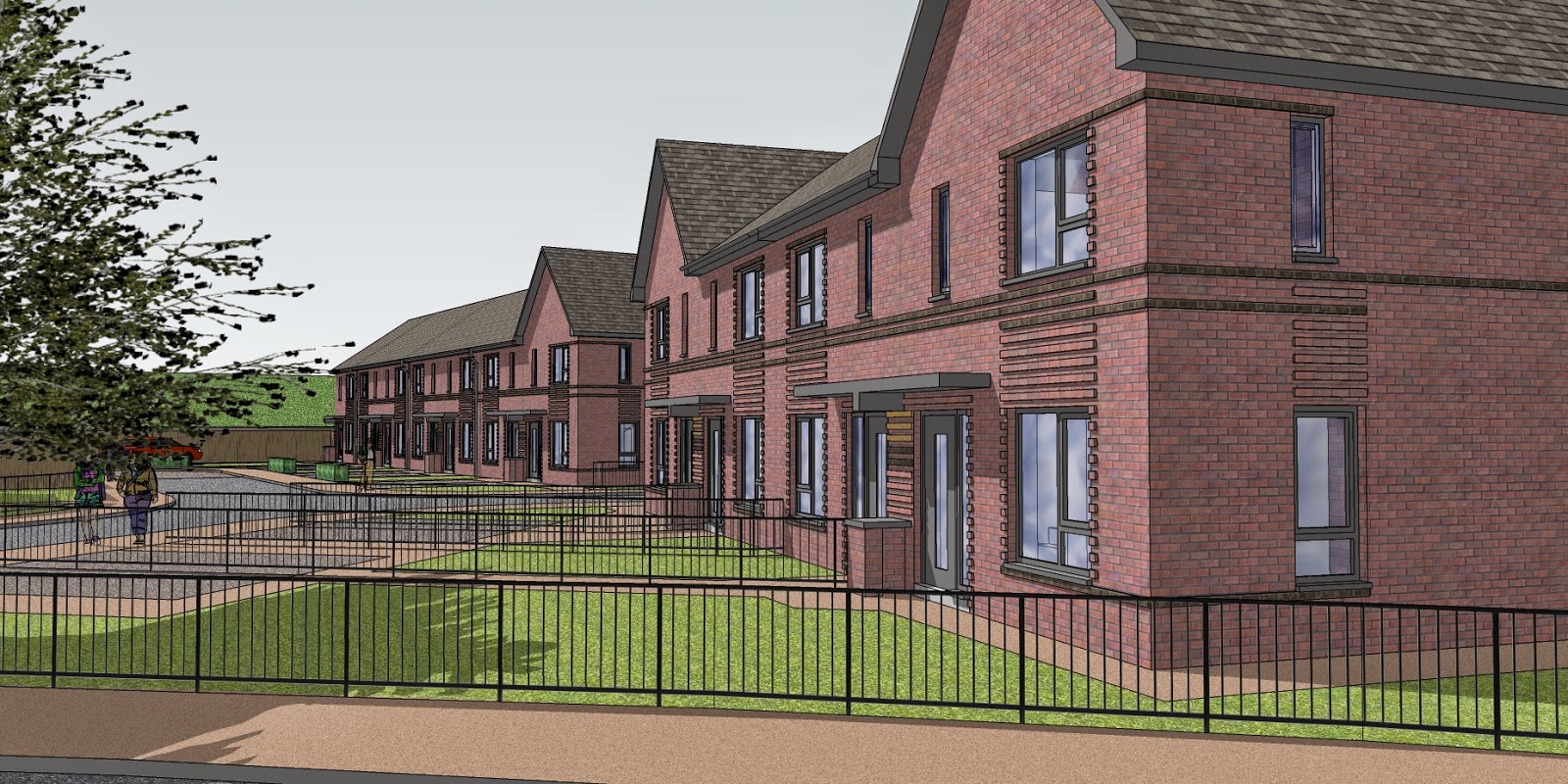 Planning approval has now been received for two sites in Wigan, totalling 53 houses for Great Places Housing Group.  Challenging site conditions dictated the design, with layouts having to accommodate large easements for sewers and gas mains.  In addition account had to be taken of the presence of Japanese Knotweed, flood zones, newts, and even a potential mine shaft in and around the sites.   The houses themselves have been designed to be low maintenance and are intended as a modern interpretation of nearby Victorian terraced housing.  Work on site is due to start in spring 2015 with Southdale Construction being the chosen contractor. Posted by TADW Architects at 07:49 No comments: